This looks like one of those simple concepts I hope gets flushed out. Simon Pegg really blends into this new role and I give him credit for being able to stretch beyond comedy and being able to do more. It looks like a interesting movie I’d be happy to check out. May the gaming gods bring you glory.

I have to say the expansion for MK11 is starting to look like a treat but there is something bothering me in the end: haven’t we seen most of what this expansion is offering before in other games before? Friendships? Stage Fatalities? Well known fighters sold as DLC? While I’m glad they made a story expansion to MK11 I can’t help but wonder to feel like a lot of these things should have been in the initial game. I hope in the end it helps the game evolve. I hope the gaming gods bring you glory.

Here’s a little taste of what I hope what will be a good bite to come. The graphics look great but I’m really hoping the gameplay feels more fluid than the original game. If the controls feel better and the better graphics, I think we can have ourselves a winner. May the gaming gods bring you glory.

First I gotta say holy hell these games look gorgeous. I’m kinda wondering why the first game got the shaft as far as trailers go. Mafia 2 looks amazing and from what I’ve been told it was the best of the trilogy. Mafia 3 looks like it got a nice graphical upgrade on top of a already beautiful game. I definitely want to check this series out. May the gaming gods bring you glory.

Once again, I’m late to the party on this but gaming has taken a back seat lately while working on my debut story, but when I heard Star Wars Jedi: Fallen Order was getting a host of free updates, I wanted to try for myself and I’m not really disappointed. I’m surprised as hell that EA hasn’t charged a dime at all for any of this. So for starters, the Inquisitor costume and red saber crystal are available once you land on Bogano early one. While it is awesome to have all the cosmetic customizations you’ve accrued through your last play-through  I was hoping for more of a Souls like experience in hard enemies and such but still the story is a great trip to play through again. The Meditation training is fun as hell and easily accessible.  In the end, this a epic update pack that makes a sweet game even sweeter. May the force be with you all and the gaming gods bring you glory.

***Update** The positives I mentioned are true but after replaying it, some massive glitches have appeared such as frame rate drops, backgrounds going nuts, and some physics going batshit. Still a great game, just now a little less great until EA fixes the bugs.

I can’t say I ever played any of the games but they were always on my gaming bucket list. It’ll be cool to see how the first 2 games look redone and Mafia 3 looked beautiful to begin with. I’ll be sure to keep an eye out for more news on this remaster pack. May the gaming gods bring you glory. 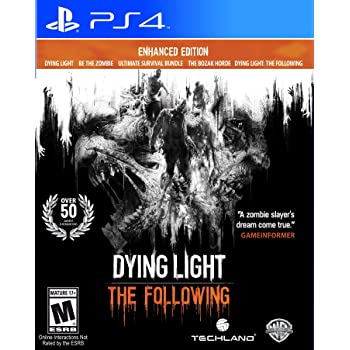 Zombies, zombies, everywhere and too many to shoot. Seriously, zombies are everywhere and like most, I usually pass many pieces of zombie media behind because they cycle through the usual tropes. Question is, does Dying Light stick out of the crowd or is it just another moaning wanderer?

Kyle Crane is a agent with the mysterious GRE sent into the quarantined city of Haran wear a viscous virus has caused the dead to rise. Once entering the city, it’s not long before Crane gets intercepted by a crime lord whose taking the opportunity to increase his power and Crane finds himself infected by a virus that doesn’t show it’s true horror until the sun goes down and the zombies grown manic and rabid and the horrific Volatilies emerge. Can Crane survive the horrors of the quarantine?

At first glance, Dying Light looks like a Dead Island clone with some Far Cry sprinkled in it. In many ways it is but once you start leveling up and unlocking new abilities, it becomes addicting fun. Combat is challenging but not overly so and parkour, while taking some time to get used to, is really fun and makes exploring the world interesting. I will warn you, some of the controls feel odd and alien so it takes awhile to get used to and even at endgame, I’d still confuse controls in a rush. The game does a good job at making night time terrifying and the Volitiles are some of the most frightening monsters of this console generation. For weaponry,their a is good assortment with nice customizable options. The game looks and sounds great but I did have some glitches where reactivity was slow and a few times where I simply just died, and die you will a lot. My biggest disappointments with this game are the pain in the ass fast travel and the weak ending. The story on it’s own is above average, including the side quests, but the end is a random QTE battle after a lot of running and climbing, making the final climax just feel like a tiny pop. In the end, Dying Light is a fun game to get lost in but despite the flaws, well worth the discount price. May the gaming gods bring you glory.