Frieza, one of the Dragonball Z series greatest and cruelest villains, is in hell. Tortured and angry, his existence is torment. One of his devout followers summons his returns to lead his forsaken army and continue his universal tyranny but Frieza has something else in mind: revenge. Frieza, who has never trained, commits and strives towards his true potential. Meanwhile Goku and Vegeta are training with Beerus and Whise, mastering SS God Blue form when Frieza visits Earth with the strongest and massive army he’s ever assembled, causing the Z fighters to reunite after many years. Once again Goku and Frieza face off, but this time Frieza has a power unlike anything Goku has seen: Gold Frieza!

I’ve got a lot of mixed feelings on this movie but overall it’s pretty good. While I was against it at first, it was nice seeing Frieza become relevant again, although Gold Frieza is kinda lame in my opinion. My favorite thing about the movie was seeing some of the classic Z Fighters back in action again like Gohan, Piccolo, Krillin, and Tien. I did love seeing Goku and Frieza’s rematch as well as Vegeta and Frieza’s. What pissed me off was the end result; I’m going to be the first to say, the ending fully makes sense in the context of the characters but I couldn’t help thinking it was cheap. In the end, it is above average anime film and it’s got some great fights but a poop ending. May the gaming gods bring you glory. 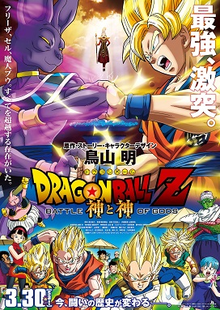 Is there any force in existence Goku and his friends can’t overcome? After DragonBall Z: Buu Saga (Kid Buu) came to an end, Goku has the opportunity to meet Beerus, the God of Destruction. Goku begs Beerus for the chance to spar against him, only to have Beerus one shot him easily in his Super Saiyan 3 form. Beerus comes to Earth with his assistant/trainer Whise and for a time is content at Bulma’s birthday party until his temper goes awry and he threatens to destroy the world. With no one strong enough to big him down, desperate times call for a ritual to create a Super Saiyan God with the total power of all the Saiyans combined into Goku. Can this new form be enough to hold Beerus at bay?

I was definitely surprised by this movie in more ways than one. First, I like that it feels like a actual feature film developing the characters and is at full length. Beerus and Whise are fun characters and Beerus is a awesome badass. I love how this movie takes a different kind of look at Goku’s character and his flaws. It is a little bit of a slow build but the climax is well worth it. In the end, it’s a great continuation of the show and a great start to Dragonball Super. May the gaming gods bring you glory.

Here’s the conclusion the the Star Wars prequel trilogy, the movie everyone stuck around for: Anakin  Skywalker’s turn to the dark side and the rise of Darth Vader. This movie was ultra hyped in 2005, and why not? Darth Vader is one of the greatest villains of all time and myself and millions of fans couldn’t wait to see the final turn. Were we disappointed like the previous did however?

The Clone Wars have come to a head and victory could go either way, but as Qui-Gon predicted, Anakin Skywalker has grown into an exceptional Jedi Knight and hero. After defeating Count Dooku and saving Palpatine and Obi-wan’s lives, Anakin is facing the chance to become a member of the Jedi council  but only as a means of spying on the chancellor who they believe is a Sith lord. Besides that, Anakin is facing the conflict of Padme being pregnant and the stress of them losing everything for there budding family and the fear he has of losing his beloved wife. Palpatine reveals himself as a Sith to Anakin with promises of a power that can save Padme, tantalizing him until the fatal choice comes and a new threat arises as the Jedi collapse. Enter Darth Vader.

It’s pretty well accepted that Revenge of the Sith is the best of the prequel trilogy and is one of the darkest entries in Star Wars. There’s a ton of epic fights, including the iconic fight between Anakin and Obi-wan as well as Yoda vs the Emperor which was also pretty badass. Darth Sidious is honestly my favorite part of the movie and is brilliantly deceptive but also menacing as hell. Sadly this movie has it’s fair share of issues. There are some cringe worthy moments, including Vader’s infamous “NO!” scene and some pretty cheesy dialogue. The pacing feels off as well, because of the amount of ground the movie has to cover in a set time, the beginning feels rushed. In the end, it’s one of the better Star Wars movies and one of the most epic so it’s well worth a watch. May the gaming gods bring you glory.

The second I saw the thumbnail I couldn’t help think of an Alien/ Slither vibe and the trailer gives me that impression mostly, just without the things that made those movies so awesome. It looks decent enough but I wouldn’t rush out to go see it. May the gaming gods bring you glory.

Yep, we’re talking about the greatest salesman of propane and propane accessories Arlen Texas has ever seen, Hank Hill as well as his wife Peggy, son Bobby, and there friends and family in this animated hit comedy. King of the Hill comes from Mike Judge, creator of Beavis and Butthead, and if you look closely, Mr Anderson and Hank Hill look and sound pretty damn similar.

What makes this show pretty damn solid through all 13 seasons are the array of  characters; while the show mostly focuses on the Hills, they smartly spend many episodes of a season on other character’s adventures which keeps the show from getting stale. The show doesn’t really have much vulgar humor so it’s not necessarily bad if your kids watch it but honestly, after watching it as a kid and as an adult, I can say the humor is way funnier as an adult. Duke and I would quote this show for weeks and admittedly, I have been known to squeal “That’s my purse!” before trying to kick someone in the balls. At the end of it, the show does have a good heart and lessons behind which is refreshing, especially in this day and age. The first season is a tad awkward but around season 2 it finds it’s footing. In the end, King of the Hill won’t be for everyone but I still recommend to give it a try. May the gaming gods bring you glory.

Savior told me of a game to check out as he frequently does ( now available on PSN) and I have to admit, the look and old school controls is seriously reminiscent of classic Resident Evil and Silent Hill. While it looks like your enemies are typical zombies, the atmosphere looks like a brighter Spencer mansion from the first Resident Evil game. If you want a classic horror throwback, this doesn’t seem like a bad game. May the gaming gods bring you glory.

I may be way late to the party on this one but once I pieced this together I found myself truly baffled. Why would Blumhouse think it was a good idea to reboot a old TV show as a PG-13 horror movie? I’m really asking what the hell they were thinking after the success of Halloween (2018) and Us . May the gaming gods bring you glory.